Bowel cancer patient invited to speak at Board 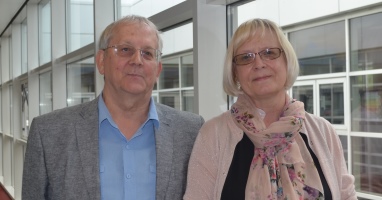 A patient with bowel cancer was invited to speak at The Dudley Group’s board meeting after tweeting about her experience from a high dependency hospital bed at Russells Hall Hospital.

Jo Marshall, 56, used social media to give her family and friends real-time updates on her recovery at Russells Hall Hospital just hours after her operation to remove a tumour.

She received several tweets from the Trust’s chief operating officer Paul Bytheway who then asked her to share her experience at the public board meeting last week (Thursday, 7th September).

Jo Marshall, from Bilston, agreed to speak to help raise awareness of the fourth most common cancer that kills 16,000 people every year.

“Bowel cancer is a taboo subject and I thought it was important to speak about it and urge anyone who is concerned to go to their GP and get checked out,” said Jo.

She attended a sigmoidoscopy appointment in March 2017 “not overly concerned” expecting to be told to eat more fibre and be handed a tube of cream.

“I was astounded to be told I had a 35mm tumour in my bowel. I felt like reality had suspended and I was watching a sad episode of a drama, except I was the leading character,” said Jo, a consultant occupational therapist.

Jo, who is undergoing 30 weekly sessions of chemotherapy, praised the nurses and doctors who looked after her for treating her like a person and not a diagnosis.

“Cancer isn’t a battle – it’s a test of endurance. The staff battled the cancer for me and my main message is that I had absolute trust and confidence in them to do their best for me. I felt safe,” said Jo.

She highlighted the excellent care delivered by the colorectal and Ward B4 teams, including their nursing students, volunteers and support staff.

“I am proud to be treated by the NHS and also to work in the NHS,” said Jo, whose chemotherapy treatment ends on her birthday in February 2018.