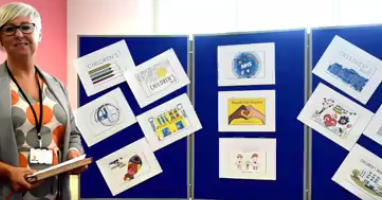 Pupils from a local secondary school in Dudley have taken part in a competition to design the front cover of a welcome booklet to be given to young patients on the children’s ward at Russells Hall Hospital.

The Dudley Group NHS Foundation Trust called on members of the public to cast their vote and choose their favourite illustrations.

The designs were submitted by art students at Holly Hall Academy in Dudley, and were whittled down to the top three by patients staying on the children’s ward.

Diane Wake, Chief Executive of the Trust who launched the voting on Facebook, was really impressed by the effort and creativity that went into the artistic works.

“The pupils from Holly Hall Academy have produced some really fantastic illustrations and I want to thank everyone who has taken part in our competition,” said Diane.

The three designs in contention can be viewed on Facebook by searching for The Dudley Group NHS Foundation Trust.

“Voting is easy – simply Like your favourite design,” added Diane.

The winning design will appear on the booklets from September.

The vote has now closed.