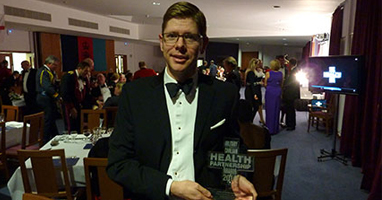 A Dudley Group Consultant Urologist has been given a prestigious award in recognition of his work with injured soldiers.

As part of the Military Genitourinary Working Group, Mr Paul Anderson was presented the Military and Civilian Health Partnership Award 2014 in the Care of Veterans category by the Surgeon General of the Army. Mr Anderson with his award at the Military and Civilian Health Partnership Awards 2014.

He is a key member of a team treating soldiers with severe injuries, usually from bomb blasts.

Mr Anderson, who also treats soldiers at the Royal Centre for Defence Medicine (RCDM) at the Queen Elizabeth Hospital in Birmingham, was delighted to receive the award.

“We are very proud to receive this award recognising the very challenging and much needed work we do,” he said.

The surgery he carries out in Dudley is very specialist and is internationally recognised. Because of this he was invited to work with injured soldiers five years ago and the specialist service has been built up since that time.

“We see servicemen with injuries of a severity we would not expect to see in civilian life. By helping them, we are increasing our knowledge and experience of how to repair such injuries and we can apply this to help all our patients, military or civilian,” added Mr Anderson.

Mr Anderson is also known widely for his work on Channel Four’s Embarrassing Bodies and Live from the Clinic, in which he appears more regularly than any other UK consultant.