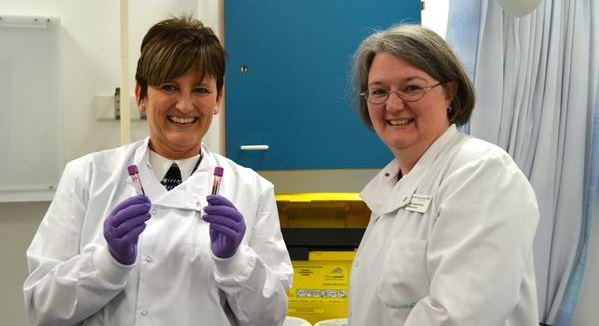 The initiative, currently the largest of its kind in the world, involves collecting and decoding 100,000 whole genomes – complete sets of people’s genes – from patients with certain rare diseases and their relatives as well as those with some cancers.

The Dudley Group NHS Foundation Trust, which runs Russells Hall, is one of 18 trusts that have come together to form the West Midlands Genomic Medicine Centre (WMGMC), which will deliver up to 13,000 of the total number of genomes.

The first Dudley recruits to the project were made during a clinic at Russells Hall, supported by staff from the West Midlands Regional Genetics Service, based at Birmingham Women’s Hospital.

Blood samples were taken from two children with rare developmental disorders, along with their respective parents, from which their genomes will be sequenced.

Doctors hope that by comparing patients’ genomes with those of relatives and other people with similar conditions, the variations that cause rare diseases can be identified. In some cases diagnoses may be provided where previously there was none and tailored treatment may be offered.

In eligible cancer patients, tumour samples are being sequenced alongside blood so that healthy genomes can be compared to cancerous ones in the hope that new drugs and treatments may be identified.

Dr Jeff Neilson, Head of Research & Development, said, “We are delighted that The Dudley Group and patients from the Dudley area are now playing a key part in this important national project.

“This is an important step forward for patients in our area and across the West Midlands region.

“Genomics is key to the future of medicine and this programme will be a catalyst for the transformation of care throughout the NHS, helping to pave the way for personalised medicine.

“Patients with inherited genetic disorders and cancer will benefit through the provision of more efficient diagnosis, better patient information and by enabling access to the next generation of targeted therapies.”