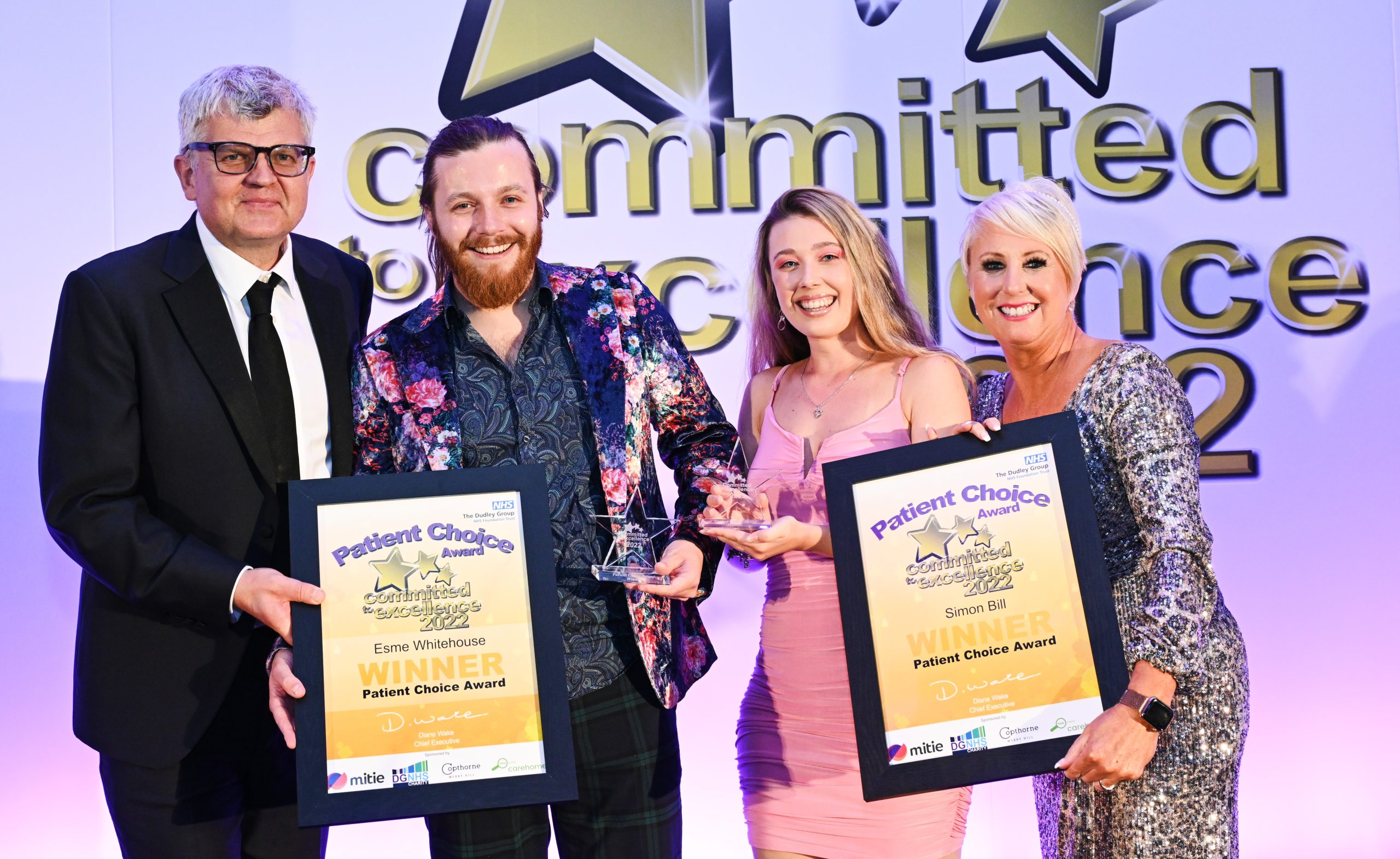 Clinical and non-clinical staff were among the winners at The Dudley Group’s glittering awards night which celebrates the hard work and dedication shown each year within the Trust.

The Dudley Group NHS Foundation Trust held its annual awards, Committed to Excellence, at the Copthorne Hotel on Thursday 21st July. Having delivered a virtual event last year and skipping the awards in 2020 due to the COVID-19 pandemic, the heart-warming and electric atmosphere could certainly be felt by all in attendance.

Amongst the youngest winners of the night were C5 staff nurse Esme Whitehouse and doctor Simon Bill, who were awarded the Patient Choice Award after being nominated by a patient’s family for their exemplary care and compassion shown towards the patient who was at end of life.

Upon receiving their award, Esme and Simon said, “We are completely blown away. It’s incredibly special for this to have come from a patient’s family taking the time to reach out and nominate us for this honour.

“It’s also been wonderful to have fellow members of staff, both those we know well and those we don’t, coming forward to congratulate us and further shows how much everyone in the NHS looks to lift each other up and celebrate each other.”

Other winners included the Trust’s ‘volunteer drivers, who were given a standing ovation when collecting the Steve Ford Volunteer Award for their role in delivering medication to vulnerable patients isolating during the first wave of COVID, and showing that no distance is too far, and no job is too small.

The night’s Lifetime Achievement Award went to Gail Parsons, who has given over 40 years of service to the NHS. Starting her nursing career at Corbett hospital in 1982, in April this year Gail was appointed Director of Research and Development making her the first non-medic, and the first female to hold this post in the Trust.

Unfortunately, Gail was unable to attend the ceremony but watched a live stream of the event from home where she witnessed the unwavering rounds of applause when she was revealed as the recipient of the Lifetime Achievement Award. Accepting the award on her behalf was her sister Bev, brother-in-law, Julian, nephew George, and his partner, Sophie.

Gail said, “Watching from home was incredibly emotional, so I could only imagine how it would have been to have attended in person. I am thrilled to be this year’s Lifetime Achievement recipient; it’s a very proud moment for me to be recognised in such a way.”

The Team Excellence award went to the Imaging Department for their effort in drastically reducing waiting times to take their place amongst the very best community diagnostic centres in the country.

The Improvement Practice award went to the paediatric team for their revolutionary Paediatric Virtual Ward, which uses state of the art technology for recording observations and data allowing children to be safely cared for at home with close support from specialist paediatric nurses and doctors without the need to come to hospital.

Following the awards night, the Trust’s chief executive Diane Wake said: “It’s wonderful to be back in person for the Committed to Excellence awards, which are always a highlight of the year and a brilliant chance for us to celebrate the hard work and dedication of our staff – and volunteers.

“Hearing the stories and experiences of both the nominees and winners here today reflects beyond doubt the breadth of great work being undertaken within the Trust. We couldn’t be prouder; so very many congratulations to all our winners.”

In all, 21 awards were presented at the ceremony, which was hosted by Black Country icon, TV & Radio presenter Adrian Chiles, and attended by the Mayor of Dudley Councillor Sue Greenaway and her consort Desmond Greenaway. A raffle and auction raised over £2,000 for the Trust’s charity.

Thanks go to the main event sponsors Mitie and category sponsor How to Find a Care Home who helped make the event possible and to local businesses who contributed raffle and auction prizes to the evening.