Freedom to Speak Up Guardians appointed 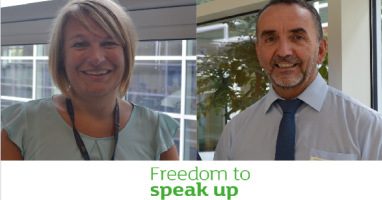 Freedom to Speak Up Guardians have been appointed at The Dudley Group NHS Foundation Trust to give staff a confidential route to raise concerns to help protect patient safety.

The guardian roles are part of the Trust’s commitment to an open and honest culture and empowers staff to speak up when things go wrong.

The Trust’s Quality Lead Derek Eaves has just been appointed a guardian to work alongside current guardian and Professional Development Lead Philippa Brazier.

“It is really important that staff feel supported to raise any concerns they may have and that we, as an organisation, promote open and honest conversations,” said Diane, who is the Trust’s executive lead for raising concerns.

“Feeling supported to speak up is vital in order to help us improve services for our patients and the working environment for other members of staff.”

The appointments follow the recommendation of Sir Robert Francis QC for every NHS employer to appoint a guardian.

Philippa said, “We have a clear Raising Concerns Policy that says we want to hear about concerns but my role gives staff an additional route.

“We will guarantee confidentiality and ensure staff are supported to raise issues which will be dealt with appropriately.”

“I am looking forward to working alongside Philippa to make sure staff know that we are happy to be contacted and that no concern is too small,” said Derek.

Philippa and Derek’s work will be supported by Diane Wake and by Non-executive Director Julian Atkins.