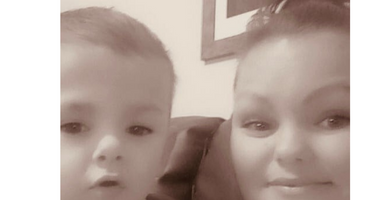 A new way of managing Type 1 diabetes has transformed life for a Dudley mum who is expecting her second baby after years of struggling with her health.

Natasha Knowles, who is due to have a little girl in May, says being pregnant a second time has been a “completely different experience” thanks to a pioneering self-adjusting insulin pump system.

It monitors her glucose levels and automatically delivers the correct dose of basal insulin – saving her having to make calculations and give herself injections throughout the day.

Twenty-seven-year-old Natasha is the first patient at Russells Hall Hospital to be given the new closed loop insulin system, also known as an artificial pancreas. She has offered to be a mentor for other patients who are starting this treatment.

Natasha has had diabetes since she was eight years old, and also has coeliac disease and Addison’s. She had a four-year-old son, Ellis, who was born with scoliosis.

She said: “This has been a completely different pregnancy altogether. With Ellis my blood sugars were constantly high, the steroids I take for Addison’s weren’t being absorbed and I was in and out of hospital.

“Then when I had Ellis, because I was looking after him I was often late doing my insulin injections. I had to do an injection every time I ate and I had to monitor my blood sugars and inject if they went too high, too.

“Then the hospital asked me if I wanted to try the new system. I said yes because I was really, really fed up with having to inject all the time.

“The difference now is massive. It tests my glucose levels every five minutes and sends that to the pump so I don’t have to do anything. My diabetes is 100 per cent better controlled and all my blood tests are fine.

“The only thing I have to do is change the pump every three days, and enter my mealtime carbs so it adjusts for them.”

Dr Jane Dale, Diabetes Consultant at The Dudley Group NHS Foundation Trust, said “We are so pleased and excited to be able to offer the new system to eligible patients, including both adults and young people.

“Type 1 diabetes is an auto immune disease which damages the pancreas and can affect any age. Before the development of insulin, it was fatal very quickly. Now patients are treated with insulin, but patients have had to make complex calculations to adjust their insulin doses. By chance, it was exactly 100 years after the very first patient received their life-saving first insulin injection, that we started Natasha on this new system.

“There have been big changes to how we manage diabetes over the last few years, with better monitoring systems, and insulin pumps. The benefit of the closed loop system is that it automatically senses the person’s background glucose levels, and tells the pump how much insulin to give them. This is something patients were having to constantly calculate themselves.

“Now they just have to allow for any carbs they eat. The best analogy we can use is it is like a self-driving car!”

“We’ve seen a dramatic difference, and it also means improved outcomes for her baby.

“The burden of diabetes and having to do all those calculations and injections is so big, and this development really is life-changing. There was an overwhelming need to have better outcomes, and we’re delighted that this is now available for people at their local trust in Dudley.”