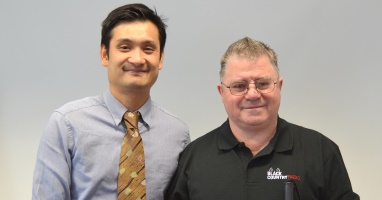 A patient at The Dudley Group has received a commemorative medal from Diabetes UK in recognition of 50 years of managing his condition.

Father-of-three Garry said, “I was 14 when I was first diagnosed with diabetes and had to spend 10 weeks in hospital. It wasn’t common for people to have diabetes back then and I felt like my life had come to an end.”

Garry, who was diagnosed with type 1 diabetes in 1966, has seen dramatic changes in diabetes care in the past 50 years.

Garry said, “It is fantastic that times have changed so much that there is now more support available to people living with the condition. Diabetes has never stopped me from living my life and enjoying myself.”

Clinical Service Lead for Diabetes Dr Terence Pang, who presented Garry with his award, said, “A lot of work and discipline goes into managing diabetes and so I am extremely pleased to be able present Garry with this award.”