Kidney stone op gets Donald back on his feet 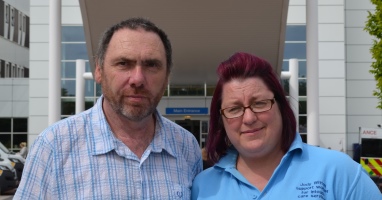 A Walsall HGV driver has thanked a Dudley specialist surgeon for getting him back on his feet after innovative keyhole kidney surgery.

Donald Witton, 58, from Bloxwich was referred to Russells Hall Hospital by surgeons at Walsall Manor Hospital to have the large kidney stone removed by Consultant Urologist Mr Asad Abedin.

“The kidney stone was large and very painful. I was in pain for 12 months, said Donald. “It was so bad that it knocked me off my feet.”

The referral was made because Walsall Healthcare Trust and The Dudley Group NHS Foundation Trust, along with Sandwell and West Birmingham Hospitals Trust, are working in a partnership called the Black Country Alliance (BCA).

Speaking on the first anniversary of the alliance, Donald said he was pleased he did not have to travel to London to have specialist surgery.

“When I was told Mr Abedin could remove the stone, I was really pleased. I didn’t mind travelling to Dudley; I just wanted the pain to be over,” said Donald. “Mr Abedin looked at my X-ray and said he was confident he could remove it.”

The procedure carried out by Mr Abedin, called a mini-PCNL, puts patients on their backs during surgery with a small incision made in the side. The stone is broken up using a drill and Mr Abedin removes the pieces using forceps.

“Kidney stone surgery usually requires patients to lie on their front. However, this can put too much pressure on the eyes if a patient is lying in that position for three or four hours during the procedure,” said Mr Abedin.

“This new technique is suitable for patients with a stone of 2cm or larger. It’s a simpler operation than traditional keyhole surgery and means patients spend less time in hospital and recover more quickly,” he added.

BCA launched on 14th July 2015 to help improve the health outcomes of the one million population of the Black Country.

Paula Clark, Chief Executive of The Dudley Group, said the first year of the alliance had allowed specialists from the three hospitals to collaborate innovatively to provide the best care for patients by developing centres of excellence in the Black Country.

“Our aim is to keep specialists services in the Black Country for our patients and this means they don’t have to travel further afield to larger hospital trusts,” she said.

“In our first year we have also launched a pilot within the alliance, and with Wolverhampton Hospitals NHS Trust, to provide a seven-day service for Interventional Radiology for patients who need fast track nephrostomy to remove blockages from their kidneys.

“We are very much looking forward to further collaboration with our colleagues in Sandwell and Walsall.”