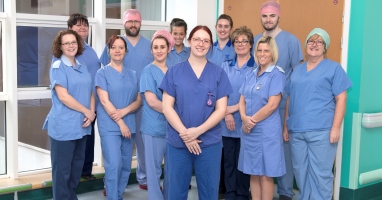 The Dudley Group’s Day Case Surgery Team has received national recognition from the Nursing Times Awards by making the 2016 shortlist.

The team, which performs day case procedures at both Russells Hall Hospital in Dudley and Corbett Outpatient Centre in Stourbridge, has been shortlisted in the category of Surgical Nursing for improvements to their service.

The changes made have resulted in patients waiting less time for their procedures and has reduced the number of cancelled operations. The team has also seen a big drop in complaints, with the department receiving zero complaints from in the first half of 2016.

Chief Nurse Dawn Wardell said, “It is fantastic that the Day Case Unit has been shortlisted for this prestigious award and that their hard work to improve processes and patient experience has been recognised.”

Winners will be announced on Wednesday 26th October 2016 at the awards ceremony in London.