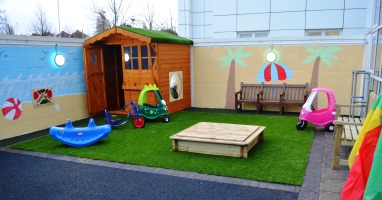 The Mayor of Dudley Dave Tyler has unveiled a secret garden that has been built for children with additional needs who attend Russells Hall Hospital for outpatient appointments. A bare piece of land next to the children’s outpatients department has been transformed and features a slide, swings and sensory toys to provide children with a relaxing outdoor environment.

Cllr Tyler declared the garden open at an event attended by some parents and children who will benefit from the new garden. He said he was bowled over by the results of such hard work.

“It is fantastic to see the hard work and commitment from everyone involved and I am so pleased to see that such a team effort has resulted in such a wonderful transformation,” said Cllr Tyler.

The secret garden was an idea suggested by parents at a listening event to improve the experience for children with additional needs. This idea also formed part of an award entry shortlisted for the Nursing Times Awards 2017.

Learning disabilities liaison nurse Jacqui Howells wanted to transform the bare, unused area for the benefit of children and thanked all those who donated to the project.

“It is amazing because we know what a difference this secret garden will make not only to our children but also to their families and our staff,” said Jacqui.

”I would like to thank our PFI partners Interserve for funding the garden and also Tesco and Rosscomm for their generous donations.”

Trust staff and members of Arise Church in Kingswinford also held fundraising events in aid of the secret garden.