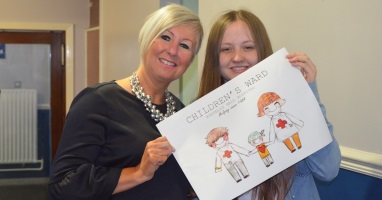 The winner of a competition to design the front cover of a welcome booklet for young patients on the children’s ward at Russells Hall Hospital has been announced.

Lily Piddington, aged 14, from Holly Hall Academy in Dudley was chosen as the winner by members of the public who cast their vote on The Dudley Group NHS Foundation Trust’s Facebook page.

Lily, who has chosen to study art and design for her GCSEs next year, said she wanted to keep her welcome booklet design simple.

Asked what inspired her pen and water colour design, she said, “I thought it would be nice to say that doctors aren’t anything to be afraid of no matter what’s happened to you.

“I wanted to show the people in my design could be anyone, no matter what race they are,” she said.

The design will be used on the front cover of the children’s ward welcome booklet and given to every inpatient who stays on the ward.

“My mum and dad were really happy I won the competition,” said Lily. “They are really proud of me.”

Diane Wake, Chief Executive of the Trust, presented Lily with a £50 Intu Merry Hill voucher at their end-of-year assembly.

In second place was Michael Ezeji followed by Amman Ahmed who came third.